The evidence is mounting that diet and lifestyle are the best cures for our worst afflictions.

In mid-February, the Institute of Medicine of the National Academy of Sciences and the Bravewell Collaborative are convening a “Summit on Integrative Medicine and the Health of the Public.” This is a watershed in the evolution of integrative medicine, a holistic approach to health care that uses the best of conventional and alternative therapies such as meditation, yoga, acupuncture and herbal remedies. Many of these therapies are now scientifically documented to be not only medically effective but also cost effective. 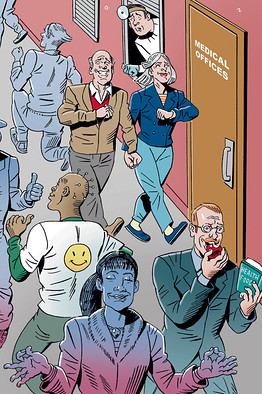 President-elect Barack Obama and former Sen. Tom Daschle (the nominee for Secretary of Health and Human Services) understand that if we want to make affordable health care available to the 45 million Americans who do not have health insurance, then we need to address the fundamental causes of health and illness, and provide incentives for healthy ways of living rather than reimbursing only drugs and surgery.

Heart disease, diabetes, prostate cancer, breast cancer and obesity account for 75% of health-care costs, and yet these are largely preventable and even reversible by changing diet and lifestyle. As Mr. Obama states in his health plan, unveiled during his campaign: “This nation is facing a true epidemic of chronic disease. An increasing number of Americans are suffering and dying needlessly from diseases such as obesity, diabetes, heart disease, asthma and HIV/AIDS, all of which can be delayed in onset if not prevented entirely.”

The latest scientific studies show that our bodies have a remarkable capacity to begin healing, and much more quickly than we had once realized, if we address the lifestyle factors that often cause these chronic diseases. These studies show that integrative medicine can make a powerful difference in our health and well-being, how quickly these changes may occur, and how dynamic these mechanisms can be.

Many people tend to think of breakthroughs in medicine as a new drug, laser or high-tech surgical procedure. They often have a hard time believing that the simple choices that we make in our lifestyle — what we eat, how we respond to stress, whether or not we smoke cigarettes, how much exercise we get, and the quality of our relationships and social support — can be as powerful as drugs and surgery. But they often are. And in many instances, they’re even more powerful.

These studies often used high-tech, state-of-the-art measures to prove the power of simple, low-tech, and low-cost interventions. Integrative medicine approaches such as plant-based diets, yoga, meditation and psychosocial support may stop or even reverse the progression of coronary heart disease, diabetes, hypertension, prostate cancer, obesity, hypercholesterolemia and other chronic conditions.

A recent study published in the Proceedings of the National Academy of Sciences found that these approaches may even change gene expression in hundreds of genes in only a few months. Genes associated with cancer, heart disease and inflammation were downregulated or “turned off” whereas protective genes were upregulated or “turned on.” A study published in The Lancet Oncology reported that these changes increase telomerase, the enzyme that lengthens telomeres, the ends of our chromosomes that control how long we live. Even drugs have not been shown to do this.

Our “health-care system” is primarily a disease-care system. Last year, $2.1 trillion was spent in the U.S. on medical care, or 16.5% of the gross national product. Of these trillions, 95 cents of every dollar was spent to treat disease after it had already occurred. At least 75% of these costs were spent on treating chronic diseases, such as heart disease and diabetes, that are preventable or even reversible.

The choices are especially clear in cardiology. In 2006, for example, according to data provided by the American Heart Association, 1.3 million coronary angioplasty procedures were performed at an average cost of $48,399 each, or more than $60 billion; and 448,000 coronary bypass operations were performed at a cost of $99,743 each, or more than $44 billion. In other words, Americans spent more than $100 billion in 2006 for these two procedures alone.

Despite these costs, a randomized controlled trial published in April 2007 in The New England Journal of Medicine found that angioplasties and stents do not prolong life or even prevent heart attacks in stable patients (i.e., 95% of those who receive them). Coronary bypass surgery prolongs life in less than 3% of patients who receive it. So, Medicare and other insurers and individuals pay billions for surgical procedures like angioplasty and bypass surgery that are usually dangerous, invasive, expensive and largely ineffective. Yet they pay very little — if any money at all — for integrative medicine approaches that have been proven to reverse and prevent most chronic diseases that account for at least 75% of health-care costs. The INTERHEART study, published in September 2004 in The Lancet, followed 30,000 men and women on six continents and found that changing lifestyle could prevent at least 90% of all heart disease.

That bears repeating: The disease that accounts for more premature deaths and costs Americans more than any other illness is almost completely preventable simply by changing diet and lifestyle. And the same lifestyle changes that can prevent or even reverse heart disease also help prevent or reverse many other chronic diseases as well. Chronic pain is one of the major sources of worker’s compensation claims costs, yet studies show that it is often susceptible to acupuncture and Qi Gong. Herbs usually have far fewer side effects than pharmaceuticals.

Joy, pleasure and freedom are sustainable, deprivation and austerity are not. When you eat a healthier diet, quit smoking, exercise, meditate and have more love in your life, then your brain receives more blood and oxygen, so you think more clearly, have more energy, need less sleep. Your brain may grow so many new neurons that it could get measurably bigger in only a few months. Your face gets more blood flow, so your skin glows more and wrinkles less. Your heart gets more blood flow, so you have more stamina and can even begin to reverse heart disease. Your sexual organs receive more blood flow, so you may become more potent — similar to the way that circulation-increasing drugs like Viagra work. For many people, these are choices worth making — not just to live longer, but also to live better.

It’s time to move past the debate of alternative medicine versus traditional medicine, and to focus on what works, what doesn’t, for whom, and under which circumstances. It will take serious government funding to find out, but these findings may help reduce costs and increase health.

Integrative medicine approaches bring together those in red states and blue states, liberals and conservatives, Democrats and Republicans, because these are human issues. They are both medically effective and, important in our current economic climate, cost effective. These approaches emphasize both personal responsibility and the opportunity to make affordable, quality health care available to those who most need it. Mr. Obama should make them an integral part of his health plan as soon as possible.

Dr. Chopra, the author of more than 50 books on the mind, body and spirit, is guest faculty at Beth Israel Hospital/Harvard Medical School. Dr. Ornish is clinical professor of medicine at the University of California, San Francisco. Mr. Roy is professor emeritus of materials science at Pennsylvania State University. Dr. Weil is director of the University of Arizona Center for Integrative Medicine. 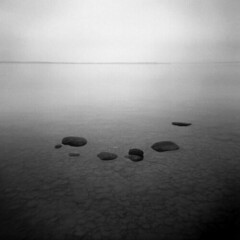 Interlochen Public Radio’s Tom Kramer has a fascinating interview with underwater archaeologist Dr. Mark Holley. While surveying shipwrecks, Holley may have stumbled upon one of the most significant finds in recent Michigan memory – a discovery that could shed light on a time period known as “the black hole of Michigan archaeology”. On one rock in a circular pattern of rocks on the bay’s floor, he found an etching that appears to be a mastodon with a spear in it.

Listen to Rare Find in GT Bay from IPR News Radio because it’s really, really cool. IPR has an update to the story with John Bailey of the Grand River Band of Ottawa Indians who thinks that the ancient rock carving in Grand Traverse Bay could bolster his view of the span that Native Americans have been living in the Great Lakes.

By the way, Dr. Holley was surveying shipwrecks for the Grand Traverse Bay Underwater Preserve, and you can check that link to learn more about that organization and their efforts. 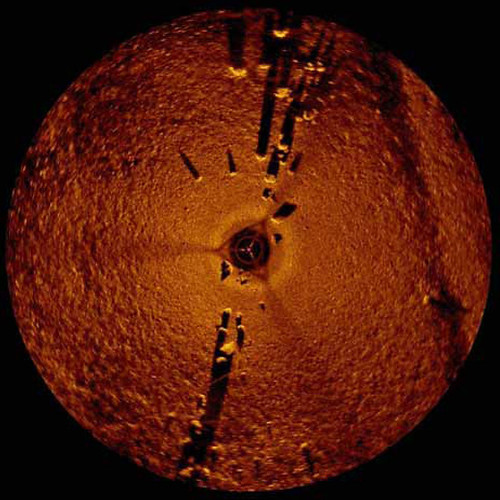 In Stonehenge Beneath the Waters of Lake Michigan, Geoff Manaugh of BLDGBLOG writes:

In a surprisingly under-reported story from 2007, Mark Holley, a professor of underwater archaeology at Northwestern Michigan University College, discovered a series of stones – some of them arranged in a circle and one of which seemed to show carvings of a mastodon – 40-feet beneath the surface waters of Lake Michigan. If verified, the carvings could be as much as 10,000 years old – coincident with the post-Ice Age presence of both humans and mastodons in the upper midwest.

Regarding the slightly repurposed “sector scan sonar” device that Northwestern Michigan University professor and underwater archaeologist Dr. Mark Holley & Brian Abbott were using to survey some old wrecks when they made their discovery, Geoff writes:

The circular images this thing produces are unreal; like some strange new art-historical branch of landscape representation, they form cryptic dioramas of long-lost wreckage on the lakebed. Shipwrecks (like the Tramp, which went down in 1974); a “junk pile” of old boats and cars; a Civil War-era pier; and even an old buggy are just some of the topographic features the divers discovered.

You’ll definitely want to click through to read the rest and see more pictures!

You can read a detailed feature about this in U.S. archeologists find possible mastodon carving on Lake Michigan rock at NowPublic and listen to some radio reports from the time of the discovery in August of 2007 that include an interview with Dr. Holley and another with Grand Traverse Bay Ottawa Indian tribal member and historian John Bailey in Mammoth discovery beneath Grand Traverse Bay? on Absolute Michigan.

Fire Up The Digital Recorders! January Is ‘Marijuana’ Month On The Groove Tube

As if this month was not busy enough with the arrival of Barack Obama to the White House and an ever-growing popular buzz about the need for cannabis law reform all over the media and internet, three major MSM outlets are scheduled to broadcast prime time specials examining aspects of cannabis prohibition.

On Friday, January 16, the venerable NBC news show Dateline has scheduled an hour-long profile of the tragic death of Florida college student Rachel Hoffman. Ms. Hoffman was arrested with cannabis and unfortunately trusted local police to become an undercover informant, which ultimately led to her murder. Her shocking death has forced Florida law enforcement to re-examine the use of confidential informants in drug cases and raised the question publicly about decriminalizing cannabis for adult use.

ABC 20/20 correspondent John Stossel’s investigative unit is going to cast its usually critical eye at government overreach and wasteful spending, this time specifically towards the noted case of medical cannabis provider Charles Lynch. By all media accounts and advanced in his legal defense, Mr. Lynch was operating a ‘Main Street’ medical cannabis dispensary in Santa Barbara, California in compliance with local and state medical cannabis laws. However, the federal government continues to selectively arrest and prosecute medical cannabis providers under federal laws. Mr. Lynch’s appeal for a new trial has been rejected and he now potentially faces a mandatory five-year sentence at an upcoming sentencing hearing. Depending on the editing process, the story will likely broadcast either Friday the 9th or 16th @ 10PM (eastern).