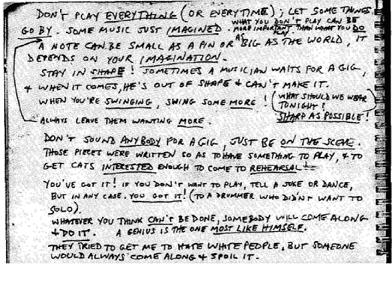 Circulating on the web are some great quotes from Thelonious Monk, as collated by fellow musician Steve Lacy. Some excerpts:

– Just because you’re not a drummer, doesn’t mean that you don’t have to keep time.

– Pat your foot and sing the melody in your head when you play.

– Stop playing all that bullshit, those weird notes, play the melody!

– Don’t play the piano part, I am playing that. Don’t listen to me, I am supposed to be accompanying you!

– The inside of the tune [the bridge] is the part that makes the outside sound good.

– Don’t play everything (or everytime); let some things go by. Some music just imagined.

– What you don’t play can be more important than what you do play.

– A note can be small as a pin or as big as the world, it depends on your imagination.

– Stay in shape. Sometimes a musician waits for a gig & when it comes, he’s out of shape & can’t make it.

– (What should we wear tonight?) Sharp as possible!

– Whatever you think can’t be done, somebody will come along & do it. A genius is the one most like himself.

– They tried to get me to hate white people, but someone would always come along & spoil it.

Your editor never heard Monk, but recalls one evening in the late 1950s a friend returned from a Boston club to report seeing Thelonious sit at the piano for innumerable choruses, just smoking and listening to the bass player and playing no more than one or two notes. Someone at a front table shouted out, “Hey, Thelonius, play something.” Monk let his cigarette drop to the floor and then kicked it onto the complainer’s table. He then got up and slowly stalked the outside aisle of the club before leaving and reportedly ended up in a mental institution that night.