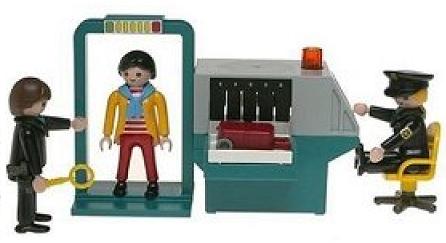 I was a little disappointed when I first bought this item, because the functionality is limited. My 5 year old son pointed out that the passenger’s shoes cannot be removed. Then, we placed a deadly fingernail file underneath the passenger’s scarf, and neither the detector doorway nor the security wand picked it up. My son said “that’s the worst security ever!”. But it turned out to be okay, because when the passenger got on the Playmobil B757 and tried to hijack it, she was mobbed by a couple of other heroic passengers, who only sustained minor injuries in the scuffle, which were treated at the Playmobil Hospital. The best thing about this product is that it teaches kids about the realities of living in a high-surveillance society. My son said he wants the Playmobil Neighborhood Surveillance System set for Christmas. I’ve heard that the CC TV cameras on that thing are pretty worthless in terms of quality and motion detection, so I think I’ll get him the Playmobil Abu-Gharib Interrogation Set instead (it comes with a cute little memo from George Bush). this)

Thank you, Playmobil, for allowing me to teach my 5-year old the importance of recognizing what a failing bureaucracy in a ever growing fascist state looks like. Sometimes it’s a hard lesson for kids to learn because not all pigs carry billy clubs and wear body armor. I applaud the people who created this toy for finally being hip to our changing times. Little children need to be aware that not all smiling faces and uniforms are friendly. I noticed that my child is now more interested in current events. Just the other day he asked me why we had to forfeit so much of our liberties and personal freedoms and I had to answer “Well, it’s because the terrorists have already won”. Yes, they have won. I also highly recommend the Playmobil “farm fencing” so you can take your escorted airline passenger away and fence him behind bars as if he were in Guantanamo Bay.

My family was planning a vacation to Europe, so I purchased this item to teach my twins about what to expect at the airport and hopefully, alleviate some of their anxiety. We also downloaded the actual TSA security checklist from the American Airlines website and then proceeded with our demonstration. . . Worst of all, since the suitcase did not actually open, the baggage inspector made a call to the FBI and ATF bomb squads which then segregated the family’s suitcase (which btw was the only suitcase they provided for our educational family experience) and according to the advanced TSA regulations, had to blow it up, (since they could not otherwise mutilate the luggage, break off the locks and put one of those nice little advisory stickers on it), which we had to simulate out in the backyard with a few M-80s and other fireworks. The girls started crying. They became so hysterical by the whole experience that we could not even get them in the car when the time came to actually take our trip, and so we had to cancel the whole thing at the last minute, losing over $7,000 in airfare and hotel charges that we could not recoup do to the last minute cancellations.

We’ve now spent an additional $3,000 to pay for the girls therapy and medication over the past year since this incident occurred, and the psychologists have told us that this will affect them for life, so much for their college fund and our retirement. Then, to top it all off, when we tried to use to Playmobil phone to call the company to ask for reimbursement, as you might expect, of course the damn thing didn’t even work; neither did our efforts to e-mail them using the computer screen on the baggage checkpoint; and our real-life efforts to contact them to obtain re-imbursement have also likewise been ignored.