Watching the crowd reaction to Bruce Springsteen at the Super Bowl brought to mind how much better Americans have become at collective enthusiasm than at collective action.

The arm punches, screaming, and the mixture of joy, tears and intense facial expressions that in any other context might be taken for anger seemed somewhat mechanical, but thanks to television, movies and prior attendance, we all know how to act in such circumstances even if it means yelling so loudly that you can hardly hear the individual you so admire. Besides – unlike, say, a 1930s big band dance concert – the promoters have made sure there isn’t much room to do anything else.

It is easy to forget how recent this phenomenon is. Many credit Frank Sinatra as being the founder of modern fan hysteria. As Pop History Dig describes it:

“By 1942, as his music was broadcast on the live radio show Your Hit Parade, sponsored by Lucky Strike cigarettes, Sinatra began attracting the attention of teenage girls. The ‘Bobbysoxers,’ as they were called for their rolled-to-the-ankle white socks, were swooning in the aisles for the young singer. Sinatra’s vast appeal to this group revealed a whole new demographic for popular music and for marketing. Sponsors had yet to recognize the vast economic buying power of teenagers and young adults, and had traditionally aimed their programming and sponsorship at the 30-to-50-year-olds. But that soon changed.

“On December 30,1942, when Sinatra played his first solo concert at New York city’s Paramount Theater near Times Square, the Bobbysoxers came out in droves. After being introduced by Jack Benny, Sinatra walked on stage to loud and continuous shrieks and screams. ‘The sound that greeted me,’ he later recalled, ‘was absolutely deafening. It was a tremendous roar. Five thousand kids, stamping, yelling, screaming, applauding. I was scared stiff. I couldn’t move a muscle. Benny Goodman froze, too. He was so scared he turned around, looked at the audience and said, ‘What the hell is that?’ I burst out laughing.’ The kids screamed in delight; some even fainted. They also crowded the back stage door after the show shrieking for his autograph, and spilled over into Times Square, snarling traffic. . . . Between 1940 and early 1943 he had 23 top ten singles on the new Billboard music chart. And all through those years, back at Paramount and other venues, the kids continued screaming and swooning for Sinatra. 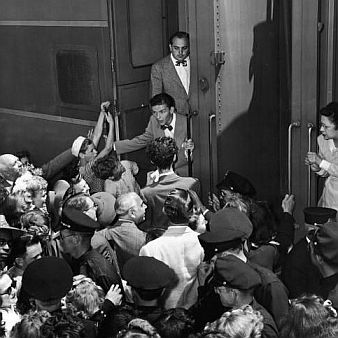 “Fans had not swooned or screamed over other singers, such as Bing Crosby. So what was it with Sinatra? Something else was going on, the critics surmised. Although his singing was certainly a factor, some charged it was also Sinatra’s look; his seeming innocence, frailty, and vulnerability that evoked the passions of female fans. Newsweek magazine then viewed the Bobbysoxer phenomenon as a kind of madness; a mass sexual delirium. Some even called the girls immoral or juvenile delinquents. But most simply saw them as young girls letting their emotions fly. . .

“By 1946 Frank Sinatra’s recording company, Columbia, estimated that he was selling 10 million records per year.”

Elvis and the Beatles, of course, contributed mightily to the phenomenon. The latter’s first appearance at a U.S. concert was at Shea Stadium and 56,000 fans showed up to set a world record in attendance and gross revenue. The Beatles cleared $160,000.

Now, some six decades into increasingly orchestrated fan hysteria, it shouldn’t surprise us if both the Springsteen performance and the reaction seemed somewhat artificial. But what did surprise – nay, stun – this cynical journalist was that a suspicion I had voluntarily suppressed not only had merit but was worse than I had imagined: the crowd knew precisely what to do.

In fact, they had been rehearsed, told where to stand and how to react – witness this video. 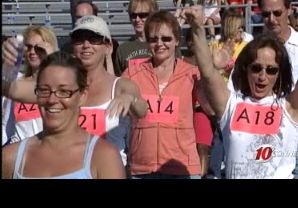 Such discoveries of rock promoters have spilled over into other aspects of our lives including politics. In fact, the Obama campaign might be fairly described as the first modeled on the principles of a rock concert tour including audiences that are better at cheering than listening, more moved by charisma than content and not too curious about what it all adds up to.

Of course, rock concerts have had a lot of help. Television and the internet, the atomization of American culture and the dominance of corporate and political propaganda in our daily lives have also contributed. So has, I’m convinced, albeit without solid evidence, the widespread use of anti-depressants and tranquilizers. It’s hard to start a revolution if you’ve drugged away your anger and disgust.

In any case, what is clear is that America has largely accepted the dismantling of its constitution, an ordinate improper transfer of wealth from the many to the few, illegal wars and the destruction of its economy with striking passivity. With a few exceptions such as punk rock, there hasn’t been a movement of any strength and continuity challenging the wrongs in America since a few years after that Beatles concert. It’s almost as though, with the arrival of disco in the 1970s, we all agreed to just shut up and do what we were told.

Disco, with its mechanizing of music, was a suitable introduction to the Reagan – Bush – Clinton – Bush era – or RBee CBee – with its similar effect on politics. The instrument of our power – whether musical or political – had been taken away and put in a machine to be managed by a DJ.

Its thus not so surprising that America has been so slow in its response to the current economic disaster. We have been trained to react but not to act on our reaction. We’ve been taught to dance to the DJ and to stand in our crowded corner of the stadium and cheer just like everyone else. And if some slight residue of independence and rebellion remains, the Prozac should take of it. If not, we’ll up the dose.

What this means is not that the collective anger and riots won’t come as they already are elsewhere in the world. They likely will and the reaction of the government will likely be cruel and senseless. But it means that our opportunity to avoid such a moment is passing us by as the very leaders who created this disaster create inadequate or even disastrous solutions and the only thing we know how to do well is to stand close to one another, yell and punch our arms towards the sky.

And it will be like until we rediscover the basic truth that the answer is not up on the stage but with those before, behind and on either side of us. In the end, we are the only band that really counts.