Help Save Frogs from a Deadly Poison 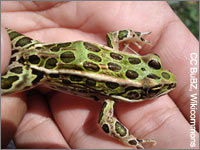 Endosulfan is lethal to threatened northern leopard frogs and also dangerous for farm workers and others who are exposed to it.

Fatal to frogs and other amphibians
Kills birds
Threatens farmworkers

Washington Post – The average American takes more than 12 prescription drug annusally, with more than 3.8 billion prescriptions purchased each year, according to the Kaiser Family Foundation. The most commonly cited estimates from Environmental Protection Agency researchers say that about 19 million tons of active pharmaceutical ingredients are dumped into the nation’s waste stream every year.

The EPA has identified small quantities of more than 100 pharmaceuticals and personal-care products in samples of the nation’s drinking water. Among the drugs detected are antibiotics, steroids, hormones and antidepressants. Last year, [it was] reported that trace amounts of drugs had been found in the water supplies of 24 major metropolitan areas; water piped to more than a milllion people in the Washington area had tested positive for six pharmaceuticals.

The EPA does not require testing for drugs in drinking water and has not set safety limits on allowable levels. While the minute quantities now being detected appear not to pose an immediate health risk, according to federal authorities, “there is still uncertainty about their potential effects on public health and aquatic life” over the long term, the EPA’s water chief, Benjamin Grumbles, told a Senate committee last year. But the impact of long-term exposure of drugs on humans as well as on other species is less clear. Hormone-disrupting pharmaceuticals, for example, are one possible cause of a high incidence of “intersex” fish in the Potomac River basin: male smallmouth bass producing eggs, females exhibiting male characteristics.

Until recently, federal guidelines recommended that surpluses of highly toxic medications be flushed down the toilet; the same advice applied to drugs with a high potential for abuse or “diversion” — the industry’s word for what happens, for example, when kids help themselves to the OxyContin or Percocet in their parents’ medicine cabinet. For other drugs, consumers have been directed to adulterate the medication by mixing it with an unpalatable substance — such as cat litter or coffee grounds — and put it out with the household trash.

But this spring, concerns about pharmaceuticals in the water supply led the Office of National Drug Control Policy to amend its advisory, telling consumers to avoid flushing unless the label or patient information specifies that method of disposal. The new guidelines still describe the cat-litter method of putting drugs in the trash, but they also encourage consumers to make use of community drug take-back programs.

Daily Green – Phthalates, a class of hormone-mimicking chemicals found in toys, cosmetics, air fresheners, plastics and other common household products, need urgent study, according to the National Research Council. Americans are exposed to phthalates and other potential endocrine disrupting chemicals, and the Environmental Protection Agency needs to study the cumulative effect of this exposure in determining the health risk, according to a report by the National Research Council, the premier U.S. scientific organization.

Because many chemicals share the ability to mimic hormones at low levels, the EPA needs to consider how various chemicals interact and affect the body. Now, the EPA typically reviews the health risk of chemicals based on the chemical structure of each compound, rather than common health impacts of multiple chemicals.

Several phthalates are to be banned in U.S. children’s products in 2009 (though products for sale this Christmas are not subject to the ban), and Europe has gone farther by banning several phthalates used in cosmetics. For the first time, cosmetics makers will report their use of phthalates to the EPA, but it’s still virtually impossible for consumers to determine which products contain phthalates from reading ingredient labels.

Here’s how the NRC framed the need for a cumulative health assessment:

“The committee reviewed animal research and found that exposure to various phthalates in lab animals produced health outcomes, including a range of effects on the development of the male reproductive system. The most notable effects in male rats are infertility, undescended testes, malformation of the penis, and other reproductive tract malformations. However, the severity of effects differs among phthalates; some exhibit less severe or no effects. Furthermore, the age of the animals at the time of exposure is critical to the severity of the effects. For example, the fetus is most sensitive. Given that multiple human exposures to phthalates occur and that research shows exposure to different phthalates leads to similar outcomes in lab animals, a cumulative risk assessment is called for, the committee said.

“The animal studies reviewed by the committee also indicated that some phthalates reduce testosterone concentrations. Depending on when this drop occurs, it can cause a variety of effects in animals that are critical for male reproductive development. Other chemicals known as antiandrogens, which prevent or inhibit male hormones from working, can produce similar effects in lab animals. The committee recommended that phthalates and other chemicals that affect male reproductive development in animals, including antiandrogens, be considered in the cumulative risk assessment. A focus solely on phthalates to the exclusion of other chemicals would be artificial and could seriously underestimate risk, the committee emphasized.”