P.O.Box 6076 Hollywood, FL 33081
(954) 981-1225
Special Thanks to Mike Barnes
radio airplay: If you hear this song played on the radio, let me know which radio station and when so we can list it in the next edition of the Electric Emperor.
audio CD: This song is on the audio CD the Empilation, available from Stephen Saunders. 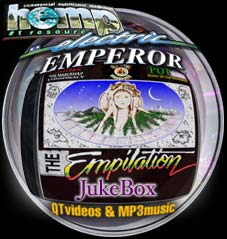