Thoughts on the chemical ‘Feminization’ of Cannabis Seeds

“Is the ‘Feminization’ of Cannabis Seeds for the purpose of forcing the plant to yield Pistillate or ‘female’ flowers NATURAL and acceptable?”

I grow traditional method, outdoors, THUNDERGRO™ treated, cull the males, and raise the females through the flowering process, and the use the graduated cull method to harvest the flowers. I feel like it is an important part of the process to let the seeds flower whichever way they wish to go, HOWEVER- I have experienced an ‘influence’ of older more mature flowering females over young undifferentiated (have not turned male or female yet)-
whenever I have a bunch of those (older flowering females) around, and also young plants, I have a HUGE increase in the number of the young plants that turn male! This influence must be happening by the females using pheromones or something, so in a sense nature is doing the same thing in a subtler way, soooo……..  still undecided on it, but lean toward the natural , NON PROHIBITION INDUCED methods and processes. I guess that would technically mean indoor growing as well..  tough to draw the line when we are a part of nature herself, so you are telling nature she cannot do anything she wishes!!! You see the conundrum I am attempting to reveal here…?!”
grin

THUNDERGRO™ IS MAKING SOME BIG IMPRESSIONS 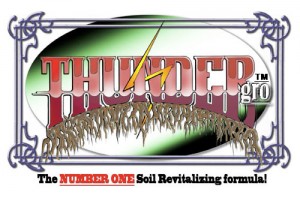 The new soil and hydro super charger formula by Living Organic Vitality Enterprises LLC,  of Rapid City Michigan THUNDERGRO™ is making a big impression on the medical marijuana producers in many areas of California and Michigan, as trials are underway to attempt to get a handle on what we can realistically expect from this ‘Physics-based’ formula. Thundergro is not a nutrient formula. It contains Minerals, Water and Electricity, and Humates. The way this formula is vibrating is one of the secrets to its ability to bring soil back to life, and the ionized silver in the formula helps to sustain this vibrational frequency. The Humates are wonderful for bringing the conditions back that invite micro-organisms and other life in the soil to flourish. The formula also derives paramagnetic force from another component  and this force is very important for all living things. Pay visit over to THUNDERGRO.COM and you can get more information.

Breaking news on Marijuana in California

The California Supreme Court today struck down the state’s limits on how
much medical marijuana a patient can possess, concluding that the
restrictions imposed by the Legislature were an unconstitutional
amendment of a 1996 voter-approved initiative.

The decision means that patients and caregivers with a doctor’s recommendation to use marijuana can now possess as much as is
“reasonably related to the patient’s current medical needs,” a standard
that the court established in a 1997 decision.

“I’m very pleased. They gave us exactly what we wanted,” said Gerald F. Uelmen, a law professor at Santa Clara University who argued
the case for Patrick K. Kelly, a medical marijuana patient from
Lakewood who was convicted of possession and cultivation. “This makes
it very clear that all of the rights of patients under the
Compassionate Use Act are fully preserved.”

The initiative did not limit the amount of marijuana that a patient could possess or cultivate other than to require it be
“personal medical purposes.”

Report says marijuana is used by nearly half of older drug users
An estimated 4.3 million Americans age 50 and older‹roughly one out of every 20 in that age group‹have used at least one drug illicitly within the past year, according to a government report released today that offers an intriguing snapshot of aging Americans and drugs.

Those who admitted to illicit drug use included nearly one in 10 boomers between ages 50 and 54, and one in 14 of those between 55 and 59, according to the National Survey on Drug Use and Health, which included a sample of nearly 20,000 older Americans.

Of the group that said they used drugs, marijuana was the drug of choice for nearly half of those 50 and older (44.9 percent). One-third (33.4 percent) admitted to taking prescription drugs for purposes other than their intended use. The survey was sponsored by the federal Substance Abuse and Mental Health Services Administration (SAMHSA).

The findings follow previous research from the agency, released last summer, noting that marijuana use among those in their 50s increased by 84 percent since 2002. ³For the most part, this is a group of people that, as they age, never gave it up,² Peter Delany, who directs the agency¹s research, tells Bulletin Today.
Marijuana use was more prevalent among those in their 50s than in other age groups, the new report finds, while nonmedical use of prescription drugs was more common in men and women 65 and older. ³We can¹t explain why more older adults are misusing prescription drugs,² Delany says, ³but we can say that those medications are more available than they used to be.² It may be, he says, that people with valid prescriptions are disposing of their medication improperly, or that some are sharing their medication with others.

The survey did not track the reasons for taking the drugs‹whether they were for pain or for pleasure. But, Delany adds, ³If this trend continues‹and we expect it will‹the number of those in this age group who need treatment may double this decade.²

He sees the findings as a wake-up call for health professionals to do a better job of screening older patients for signs of drug abuse or misuse. ³When I go to my physician,² Delany says, ³I¹m asked about my tobacco and alcohol use, but I¹m not asked if I¹m using drugs. Also, I¹m not asked if I¹m feeling sad or want to hurt myself.²

Looking at all age groups, researchers find that men have higher rates of all types of illicit drug use, with one exception: women between ages 60 and 64. They are nearly twice as likely as men in their age group to take prescription drugs for nonprescription purposes.

The potential for prescription misuse‹and abuse‹in older Americans is nothing new. In a 2007 study published in the American Journal of Geriatric Pharmacotherapy, researchers from the University of Maryland¹s School of Pharmacy in Baltimore found that one in four older adults had exposure to prescription medications with ³abuse potential.²

³Most are painkillers,² says Linda Simoni-Wastila, a professor and lead author of that research. ³And a lot of it starts out as appropriate. Older folks don¹t usually run out and say, ŒI¹m going to be a recreational user.¹ But they have lower back pain, they can¹t sleep, so their doctor continues to prescribe the drugs‹and they get hooked.²

She adds that she¹s not surprised by the new SAMHSA research. She theorizes that in addition to old habits‹the Woodstock generation holding on to its pot-smoking habit of yesteryear‹there is also new, growing acceptance and use of medical marijuana.

News of A Survivor

I just got the news that my friend who was gravely ill with Stage 3 malignant lymphoma 3 years ago, (they said then she had 6 mos. to live) received a letter from her doctor this week that says she is completely clear and healthy, no Cancer no NOTHING!  The last news I reveived on this was about a year ago, she said that in a very rare and unusual jump in her diagnostic numbers she would be downgraded from stage 3 to stage 1! now this amazing news!!

Good thing she did not go for that radiation and chemotherapy!

She will tell you that she quit drinking and smoking poisoned cigarettes, and scrubs her skin really well everyday and eats ALOT more raw vegetables, and smokes weeeeeeeeeeeed.

I am so glad to have her around, as some of you may know I lost my Mom to Cancer and some of my other loved ones and their Mom’s too. many have lost Dad’s and Brothers and Sisters and babies and I have spent alot of time and energy just trying to understand WHY WHY WHY….
I Coulda been anything done anything in life SERIOUSLY.
Those who grew up with me know the truth of this.

and yet it was this CANCER KILLED MY MOM that consumed me, and it led me to marijuana and some important research.

Anyway I am happy to share this blessed news about my friend.

High Times > A recipe to help keep your Soul Growing! Helping others is key!

High Times > A recipe to help keep your Soul Growing! Helping others is key!

War Breaks Out Within the Marijuana Legalization Movement (Part 1)

War Breaks Out Within the Marijuana Legalization Movement (Part 1)