Check out this great Calendar!!

This is a fantastic calendar with shots of the Siri Singh Sahib that you cannot find anywhere else!!

The profits of the sale of this calendar go to the House of Guru Ram Das. 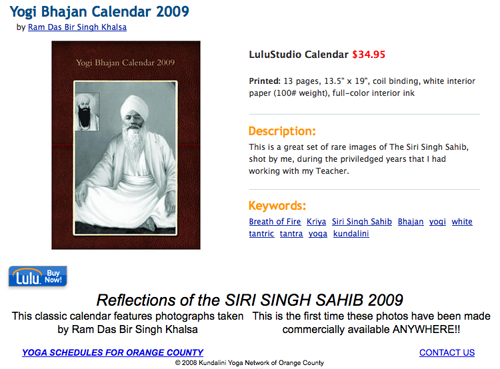 Thoughts on the word CONSTITUTION

The powerful thing about our nation and therefore our business economy is our Nation’s Collective Constitution, preserved and protected by an “organ” of law. It is tied to two other powerful “organs” or Documents/contracts, The Writ of Habeas Corpus, and the Magna Carta. This combination literally binds the laws that govern where our health an energy can go to the laws of physics, keeping us and our ‘Constitution’ in harmony with Nature and each other.

The last few years of living with out them connected has shown all of us how quickly chaos can creep in to our lives.

Personally committing to a level of breathing and connecting to how that makes me gain energy and move energetic and physical junk from my body, when I conciously connect to the breathing like when I am riding my bike or doing kundalini yoga.
then the other side is sitting super still and thinking of nothing and breathing… that has been instrumental in giving me clarity and focus and healing.
Also my whole world changed when I quit eating meat which was hard as I was raised on farms in Northern Michigan where people eat alot of wild animal meat in their diets!!!
Since I have stopped eating meat 16 years ago now, I have an incredible amount of energy and resistance to illness ( I do not get sick anymore even when my family or friends are sick..) I know it comes from not eating all the extra antibiotics that are in marketed meat that comes from flesh and not veggies.

Hope this is helpful to everyone.

JAKARTA, Indonesia – Muslims in Indonesia are banned from practicing yoga that contains Hindu rituals like chanting, the country’s top Islamic body said Monday, echoing concerns by some religious groups elsewhere about its effect on their faith.

Though not legally binding, most devout Muslims will likely adhere to the ruling because ignoring a fatwa, or religious decree, is considered a sin.

The decision in the world’s most populous Muslim state follows similar edicts in Malaysia and Egypt as the ancient Indian exercise gained popularity worldwide in recent years.

Cleric Ma’ruf Amin said the Ulema Council issued its ruling over the weekend after investigators visited gyms and private yoga classes across the sprawling nation. Amir said those performing yoga purely for health or sport reasons will not be affected.

“They shouldn’t be worrying about this,” said Jamilah Konny Fransiska, a yoga teacher on the northern island of Batam, adding that all of her students perform yoga solely to strengthen their bodies and minds.

“There is little or no spiritual element to it,” she said. “The clerics should be focusing only on purely religious matters, not this.”

Yoga — a blend of physical and mental exercises aimed at integrating mind, body and spirit — has become so popular in the United States that many public schools have started offering it as part of their physical education programs.

But there, too, yoga has come under fire, with some Christian fundamentalists arguing its Hindu roots conflict with their own teachings.

A few secular parents are also opposed, saying its spiritual elements could violate rules demanding separation of church and state.

Though there is no Jewish law against yoga, which is widely practiced in Israel, some movements that insinuate idol worship are frowned upon, but not banned, by rabbis. This is to avoid misunderstandings that followers are praying to entities other than God, the sun for instance.

Indonesia is a secular country of 235 million people, 90 percent of them Muslim. Most practice a moderate form of the faith, though an increasingly vocal extremist fringe has gained ground in recent years. They have in some cases succeeded in influencing government policy, because many leaders depend on the support of Islamic parties.

The Ulema Council decided to investigate the need for a yoga ban after religious authorities in neighboring Malaysia issued their own fatwa late last year.

Many people there protested, insisting they had been performing yoga for years without losing their faith. Eventually, even Prime Minister Abdullah Ahmad Badawi had to step in, assuring Malaysians they could continue with the exercises as long as they didn’t chant.

“We only prohibit activities that can corrupt Islamic values,” he said.

The Ulema Council’s annual meeting on fatwas over the weekend also debated whether to issue an edict banning smoking in Indonesia, one of the world’s largest tobacco markets.

But cleric Amin Suma said Sunday those talks ended in a deadlock.

“his job is to share light and not to master..”